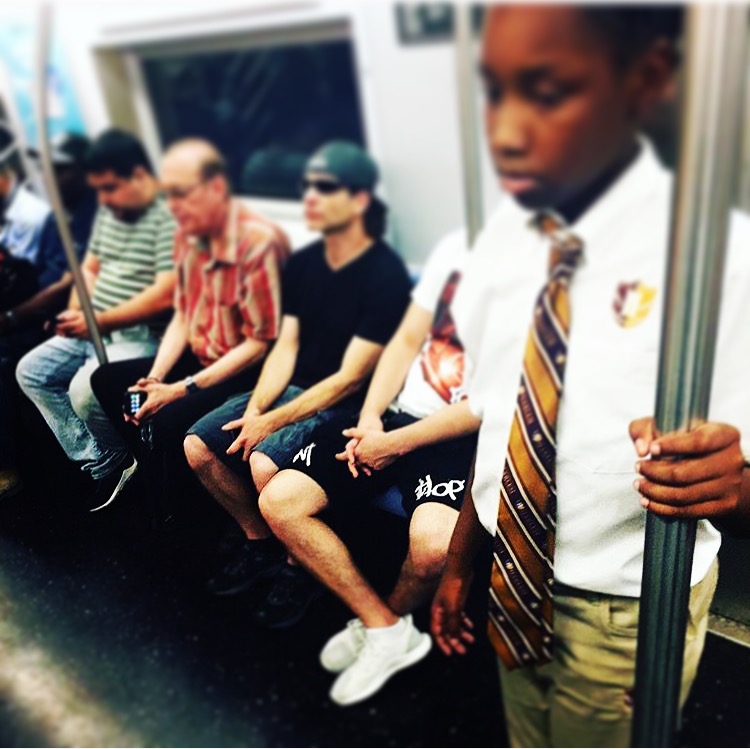 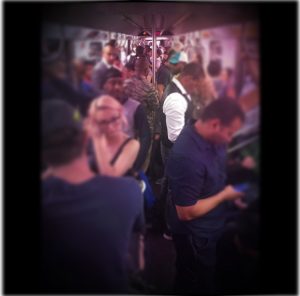 On my IG page (@BklynTyeNYC), I have Hashtags I frequently use = #NeverADullMomentWhileRidingTheMTA & #BTNYCSubwaySeries, whenever I’m posting a variety of the things I see while aboard the NYC Public Transportation System (MTA: Metropolitan Transportation Authority). Whether its on the buses or the Subway, I capture Entertainers who sing, dance, SHOWTIME *train-pole-flippers/toe-to-foot-hat-tossers*, And many times, the crazy folks who come on and make me wonder why I just don’t drive to my destination…

I have to utilize the MTA though because its the best way to get around in New York City IF you don’t want to be in Traffic at Any giving time of day! Or you want to save money by NOT having to park everywhere you go Or wasting gas driving around looking for a parking spot OR Parking somewhere and coming back to a damaged car, ORRR the bail money needed from an accident which involved you Layin’ Hands,,, Anyway, You catch my drift! Oh, Then there’s Road Rage from the idiots who shouldn’t be on the road. UGH! So New Yorkers take the bus but Most of us take the subway, Many of us use both, as frustrating as it is.

You can get to 4 out of the 5 Boros (Boroughs) by train (Brooklyn, Queens, The Bronx, & Manhattan aka The City aka NYC) *Staten Island doesn’t have a train system but they do have the Ferry (boat)* and all 5 boros have many bus routes. For the most part its convenient and it doesn’t matter what type of lifestyle you live. I’ve seen poor homeless riders as well as Rich folks. Even celebrities who have Jets as well as a ton of cars parked at their homes be on the train. Don’t Believe Me?! Check their IG and other social media pages. Hell, Even Jay-Z was on the train, traveling to Barclays… who remembers this:

As a true “StrapHanger” *defined as: 1) Person who commutes daily via Public Transportation 2) A standing passenger on Bus/Train* I have been in many crazy situations and have seen wild shyt but Because I am aware of all of the delays and Madness that can and WILL happen each time I ride, I no longer get upset. I mean, these things are to be expected so instead I leave in enough time so I’m not late to my destination.

Recently I had an experience that bothered me to my core. PISSED OFF would better describe my feelings at the time. It was actually something that happened to my youngest daughter while coming home from school one day. She attends a school in a different city than we live so she has to take both buses and trains to get to and from. Its about a hour and a half commute plus a few blocks to walk in both directions each school day. Not that that really matters but just for dramatics *shrug*

I had a moment where I realized Men are no longer courteous when it comes to Women: Pregnant, Elderly, Handicap, Kids = FEMALES IN GENERAL!

What happened to Boys/Males/Men, being taught to give up their seats. Hold the door. Ladies first!? We DONT teach etiquette like this to them these days? 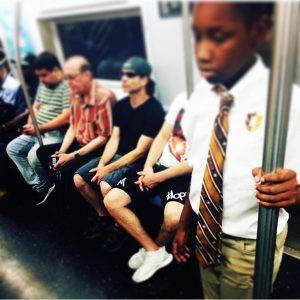 One day while heading home from school, my Heavy Hitter & I got on the “E” train at 53rd & Lexington (NYC) which was our 2nd train on this travel. I was Appalled at the men who sat down and tried to act like they didn’t see my daughter, or the other lady who was standing behind me during this shot (pic abv.). Did they Not See Me Either? Also on the other side of this shot, more men were seated. Men who didn’t budge or attempt to offer their seat. I was in shock. Like NOT ONE OF THEM OFFERED! I was bothered by this for the rest of the evening. So much so, I ended up posting this picture above with these words the next day:

These grown ass men didn’t Budge to offer my 10yr old daughter a seat on the train/Subway ystrdy after school – Bastards! Different races and ages sat on either side. Full of men. This is Daily though in #NYC – it’s as if it Kills Men to get up and stand. I’ve seen other women, including myself, offer seats to elderly passengers, Pregnant ??women, even disabled ppl. Seated men always look the other way as if they don’t see them, smh… Imabt to start Putting them on Blast Watch #BTNYCSubwaySeries •Heavan was able to get seat on the next cart.• #NeverADullMomentWhileRidingTheMTA #SpreadLoveItsTheBrooklynWay #Goodmorning

I mentioned “Different races and ages” because I didn’t want my followers to comment with the Bullshyt! Making excuses as to why this went down like this. I remember back in the day, not too long ago it seems, there was a time when Men, Boys in general, would get up and offer their seat. That was a lesson I taught my son at a very early age when I started taking him on the trains and buses. I instilled in him values and being respectful to women. Honoring his Queen! Making things easier for the women around him to some extent. I probably would not have been as upset or even have paid too much attention had the men been teenagers or young adult men (since a lot of today’s Millennials aren’t being raised properly).

Again, THESE WERE GROWN ASS MEN! Men who were in my age bracket or older and should Know Better!!! 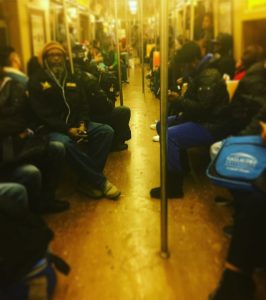 The days that followed I started to pay attention and appreciate the recorded announcements of the MTA which come on and state something to the point of “It is Suggested to offer your seat to the elderly and pregnant women.” So Although it isn’t LAW, it is Suggested/Recommended. I love when that message comes on while a woman is standing over a seated male passenger who isn’t wearing headphones so he hears it Loud and Clear! Ha! However, he still doesn’t get up.

Sidebar: I think the women raising some of these boys to men were the same ladies once upon a time yelling IM INDEPENDENT! I DONT NEED A MAN! I’m Just Saying!

For some men, it’s too late but to those of you raising boys to men, Please, on behalf of those of us who have daughters granddaughters and younger sisters, Train and Raise them up right! And this is no matter where you are. No matter the State or City! I believe Men should hold the door for women, allow them to sit or at least offer. Pump their gas every now and then and it’s OK to share a smile. And As Always,