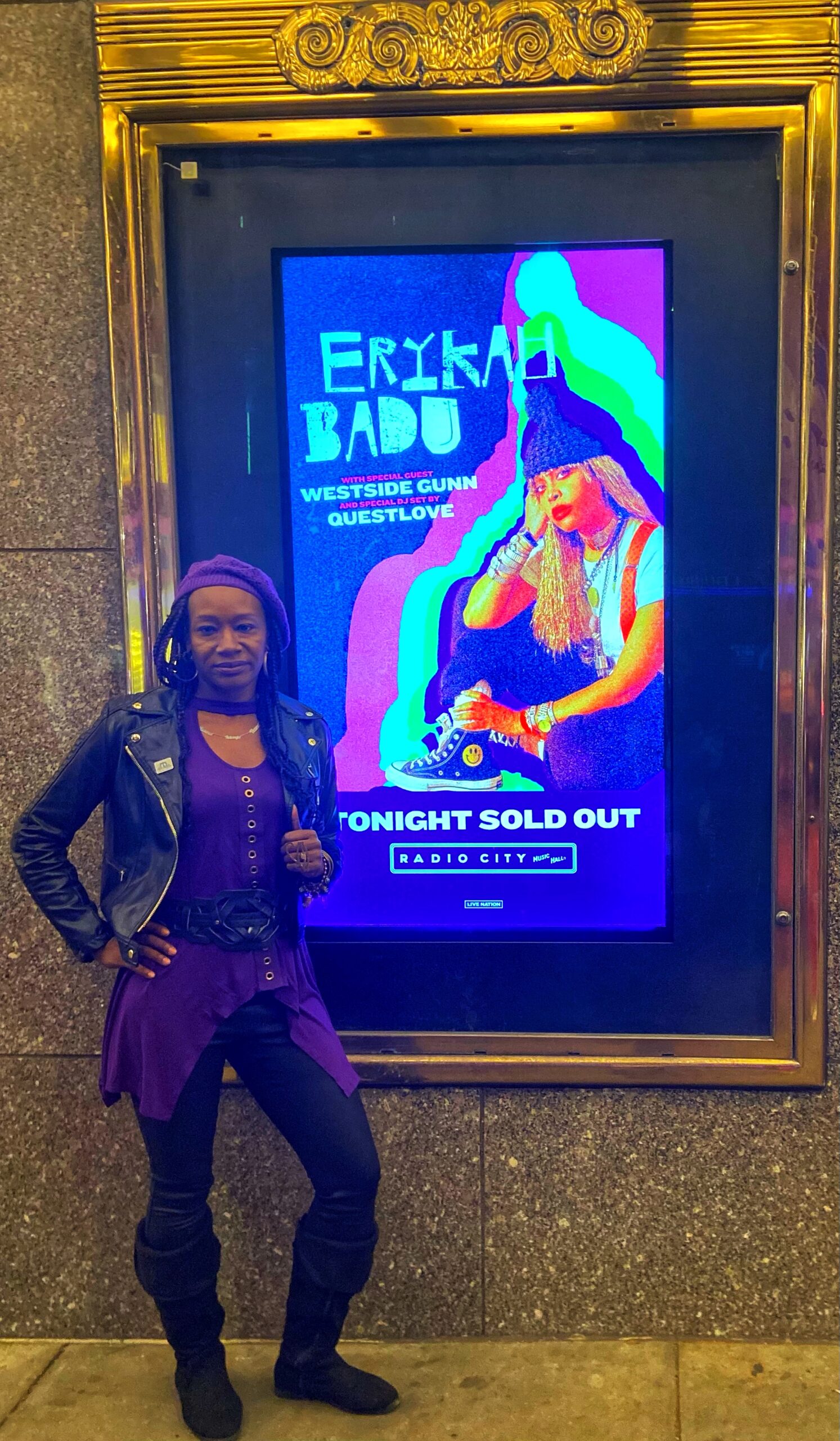 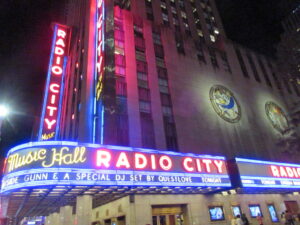 September, 30th 2021 I had an AUHMAYZEN night out with myself. Being single in NYC isn’t fun but I still take time out to enjoy myself, alone. I have always had a love for Erykah Badu and have had the pleasure of seeing her LIVE a few times in various locations. I’ve seen her in Norfolk, Va and at Essence Music Festival, along side, Jill Scott, in New Orleans and recently, I was able to see her in New York City. As usual, she gave us a Phenomenal experience. 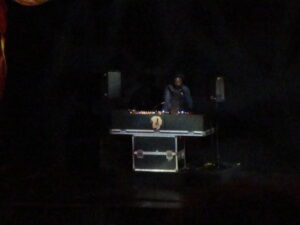 Radio City Music Hall had a nice crowd of ALL ages. I was so excited not only to see the Queen, Mz. Badu, but to also see QuestLove, who was in DJ form. Every time; the many times I’ve seen him Live and direct, he has always been behind his Drums. To see him with 2 turntables and a laptop, was one for the books. QL gave us a :45min set (give or take) of Funk, Jazz, HipHop and more. If you have never seen him live, be sure to see him when you can. QuestLove is a breath of fresh air to any room he enters. Bet That!

Before I was calling myself a “blogger”, I was always one to be EVERYWHERE, then tell folks of the experience I had. In October, 2012, I had been asked to do a ‘write-up’ on Erykah Badu for a radio station and promo company. It was the “Love & Laughter” tour. I had it linked to my TUMBLR. Maybe I will locate it and revise this blog entry and add the link. That was my 1st time seeing her. And now that I think about it, my very 1st blog. I’d been given a ticket and it was a Rickey Smiley Morning Show event. Yea, I have to find that blog. Stay Tuned… 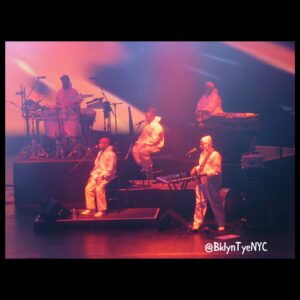 I was super excited for this show though because it was one of the first shows/concerts I was able to attend in NYC since being Vax’d. Best of all, one of my favorite singers, since COVID started, would be apart of this BADUBOTRON tour. His name is Durand Bernarr (@DurandBernarr). I am a huge fan of Lena Waithe and one night, 2020, while on IG stories, Lena posted him and I fell in love. His voice is AUHMAYZEN! His personality comes through his voice. He is vibrant. Free spirited and a pothead, lol. I don’t think it gets any better. One of his singles, “STUCK” ft Ari Lenox, stays on repeat every morning. And by the way, if we were related, he would be from my Momma side. 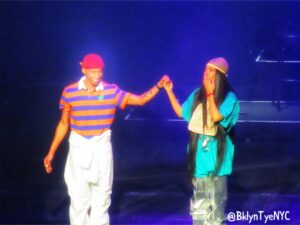 Durand is definitely on my bucket list of ‘People to Interview’. I would also like to sing ANY song with him. That would be so dope. For this tour, he was one of the co-singers and they started the show harmonizing in white jumpers. I was on the edge of my seat. He is like one of her prodigies. She is his Musical Mentor. I think its so dope how she took him by the hand at the end of the show and allowed him to take a bow. He walked the stage and ‘Got his Flowers’ as they say. 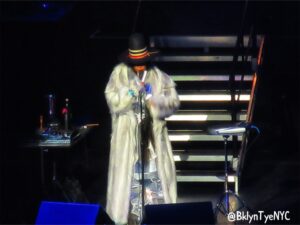 Anyway, I dont want to get ahead of myself… Erykah Badu came out in this long ivory colored fur, over a futuristic shiny space suit style coat with matching boots and her signature type of top hat she’s famous for rocking. Hiding a very long length of hair. She looked Marvelous. Erykah Badu started off greeting us with “HELLO,HELLO” and I immediately caught the vibe and stood up. I wont give too much but I will give yall just enough to be mad yall missed it! I hope this makes you want to see, when and how soon you can catch her in your City. I was able to capture video so check out this visual.

The band started playing a cool flowing instrumental of “To Each its Own”… I honestly dont know the proper title to that song but its groovy and I have video of that on my youtube channel (click this link: BKLYNTYE NYC YOUTUBE) so be sure to check out the playlist of videos I have from this night. By the time she started with “On and On” we were all on our feet, hands in the air. Then she had us harmonizing as she added some adlibs and freestyle rhythms. About half way in she finally removed the fur she had on. this was when I knew she was finished warming us up. 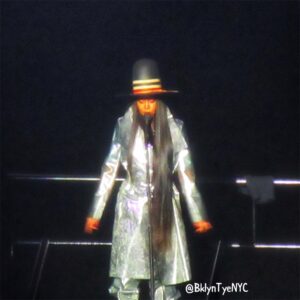 “Love of my Life”, almost brought me to tears. I’m telling you, this song has sentimental values. It takes me back to happier times. A younger Lovesick, Young Adult, ME. I was 25 or so and soooo in looove, with the Love of My Life, at the time. He became my husband (now ex-husband) and we had 3 kids together. As I watched her sing this, my eyes started to get tight as tears started to form. When this single dropped, Life was Grand. Love was in the air for many of us youngsters. You couldn’t tell me, he and I would not be together forever. If I only knew then what I know now,,, Geesh!

She paused and asked “WHERE BROOKLYN AT?!” before doing a ROLL CALL to see who all was in the building. First she was curious to know who was having their 1st BADU Experience. The crowd was loud. It was clear most of us had seen her perform and we wanted more. Then she asked where the 70’s and 80’s babies were at. Then admitted she wrote BADUISM for the 90’s babies because at the time she was carrying her oldest son, Seven. Damn, this was 1997. She said “if you were a baby then, then you’re my baby, too.”  Erykah badu started singing, “Apple Tree” and of course we all sang along. We were out of our seats and dancing like we were at someone’s house party. I have a Mean 2-Step! She went into, “I can make you put ya’ Phone Down” and well, all the ladies got to swaying our hips because its what you’re suppose to do, ha. It’s a quick tune. Interlude of sorts. 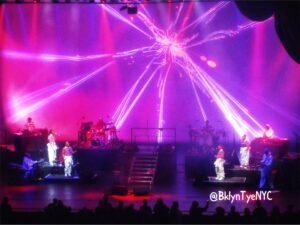 After she gave us her rendition of the classic single from New Edition,”Mr. Telephone Man.” Next, Erykah Badu took her time with, “Other Side of the Game” and I was there for it All! It became so heated, she had to remove her hat. The band was on Pizz’Oint and the Co-Singers were rocking. She drank liquids in between.  Damn. Yup! I have video, too. She gave us a few short ballads and then went into, “Window Seat” and as she caressed this song with her voice, she began removing the silver coat/jacket which I thought had been a jumper. When she got to the “Beam Me Up” part, beams really shone down surrounding her. Fiyah!

You would have thought that was the end of the show, but for those of us who have been to many concerts, we know, the star performer will leave the stage and we, the audience, will (most times) Scream-Cry out ENCORE, ENCORE, calling them back on stage but we knew she wasn’t done. I mean, how could she come to Radio City Music Hall in New York City and NOT give us, “Bag Lady” & Tyrone”,,,  just then, she started with BAG LADY!

She allowed us to sing along with her as she pointed the mic to the crowd, periodically and let me tell you, we sang our hearts out. At the end she brought to the stage, Story Boy P, a Free-style/B-Boy Body Moving Street Dancer from NY. She pulled him up to the stage. He had been in the front of the crowd. Story Boy P danced in the corner for a bit then she walked back over and brought him to the middle as she continued to say his name so we wouldn’t forget! He slithered and did body moves that made my stomach hurt. I was amazed. We all were. Eyrkah Badu told us, she loved art, and any kind of song that talks about Peace and Love. She encouraged us to be true to ourselves. She said, “I believe my best work is still in me.” That’s words to live by for sure. Definitely adding it to my daily affirmations. 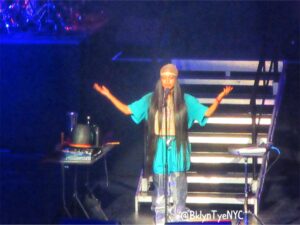 When she was about to leave the stage for the final time, to end the show, she said, “You Kno’what time it is!” and then came through with TYRONE. This man 3 seats from me became so damn hype, he’s all in my audio screaming with excitement. lol *audio available on Episode 5 of my podcast. But of course EVERYONE sang along and when I tell you, We Sang that shyt, WE DID THAT! hhaaha. At the end of the song, she started adlib’n and freestyled the end like, PUT A MESSAGE IN A BOTTLE AND CALL HIM!,,, YOU BETTER USE TELEPATHY CUZ U CANT USE MY PHOOONE! lol. Then she introduced us to the band from the drummers to the Co-Singers and of course when she introduced Durrand, I started Screaming… Then she went back into the song without skipping a beat. Maaaan! And just like that, the show was over. Such a memorable experience as always.

Be sure to check out my youtube *BKLYNTYENYC YOUTUBE * because I have videos up from this night and other events I’ve been to as well.